The Platinum Canadian Maple Leaf is part of the Canadian Maple Leaf series of Precious Metals bullion coins which debuted in 1979 with the Gold Maple Leaf coin. Platinum Maple Leaf coins were added to the Maple Leaf catalogue almost a decade later, after the Royal Canadian Mint had cemented its excellent reputation with its Gold coins, which consisted of .999 pure Gold, refined to .9999 in 1984, with no alloys, a rarity at the time. Due to this success, the mint decided to add Canadian Platinum coins and Silver coins to the series in 1988. That year, Canada ranked third in worldwide Platinum production, which was used in Platinum coins and for industrial uses, third only to Russia and South Africa. These stunning Canadian coins are part of the wide assortment of Platinum Bullion available at APMEX.

Platinum Canadian Maple Leaf production started on Sept. 22, 1988. These Platinum coins had a special “striking ceremony” for both the Platinum coins and Silver coins. Junichiro Tanaka, president of the largest Precious Metal distributor in Japan, struck the first Platinum Maple Leaf. He was chosen to strike these Canadian Platinum coins because at the time, the Gold Maple Leaf was extremely popular in Japan, accounting for 70% of all Gold coin sales there.

The Platinum Canadian Maple Leaf was available for sale to the general public on Nov. 17, 1988. The Canadian Platinum coins were available in different weights and denominations, with face values ranging from $5 to $50. Platinum coins, of course, are worth more than their symbolic face value. These Platinum coins are worth their value in Platinum, based on the current spot price of Platinum plus the cost of fabrication, distribution, nominal dealer fee and any numismatic value. The original version of the Platinum Maple Leaf featured the effigy of Queen Elizabeth II, as designed by Arnold Machin, which has been updated in later versions. APMEX makes it easy to buy Platinum online, including the stunning Canadian Platinum Maple Leaf. 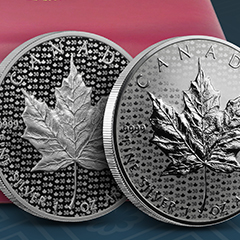 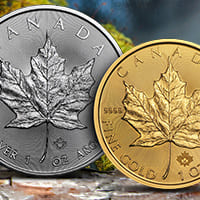 What are the Top 10 Platinum Coins for Investment?